Horn of the Alpha - Thunderhide:

16 ianuarie 2020
To Your Health! Here's an Update
GENERAL CHANGES


Horn of the Alpha:

New year, new you, and coming soon – new season. That’s right, the Beta Season is nearing its end, and Underlords Season 1 will ship by the end of February.

In addition to our standard bug / balance patches, we’ll probably have one more update before the big ship date - one more Underlord to round the game out. Otherwise the team will be heads down working on Season 1. This includes work on the Battlepass, City Crawl, Hero / Item rotation, and UI updates.

We’ve said it before, but we want to thank you all again for playing with us during this beta / early access period. The community’s support and feedback has been invaluable to getting the game to where it is. We’re in the home stretch and are excited to ship Underlords 1.0 soon - and get the word out to a wider audience.

And now, this week's update:


Vesture of the Tyrant:

ALLIANCE CHANGES
6 ianuarie 2020
The Fix In Which Happy Hour Is No Longer Unhappy
HOTFIXES
As these are server-side fixes, they will take effect immediately on iOS and Android without needing a client update.
28 decembrie 2019
The Update In Which Friendly Fire Gets Even Less Friendly
GENERAL


ALLIANCE CHANGES
23 decembrie 2019
Let's Go Have an Update
NOTE: Please quit (force-close on mobile) your clients and restart them to receive this update.

19 decembrie 2019
Jull Want This Hotfix
NOTE: This patch is live on PC and on servers now, but will roll out to Android and iOS clients once approved. If you're playing multiplayer games, or proto-pass bot games, you'll get the new balance changes even with an old client.

ITEMS
For Standard and Duos modes, item odds have been shifted so that higher tier items become available earlier in the match. For full details see the Glossary section of the Rulebook.

Hobgen (High Damage Dealer): Explosivo - fixed a bug that was preventing this ability from dealing damage.

ACHIEVEMENTS
The Achievement for defeating a set number of Neutral Rounds has been replaced with an Achievement to Obtain a set number of items.
18 decembrie 2019
Jull-tide Greetings
Happy Holidays Underlords! Some big changes and updates for you all today - we're introducing a new Underlord, bringing in a new rotation of items, and making some significant gameplay changes. There is a bunch to cover, so let's get into it. As always, if you prefer your updates in bullet point form, go check out the patch notes.

INTRODUCING JULL
The proprietor of the infamous “Sundered Moon”, Jull is a businessman first and a criminal second. Did he break a few legs to get to where he is? Yes. Does he run a massive smuggling operation to ensure that his bar is stocked with the fine beverages that Icewrack is renowned for? Of course. But while Jull has little interest in following the law, he takes great pride in honoring his word. In the wake of Mama Eeb’s death, he feels like he alone has the temperament and strength to restore order to the criminal underworld of White Spire. 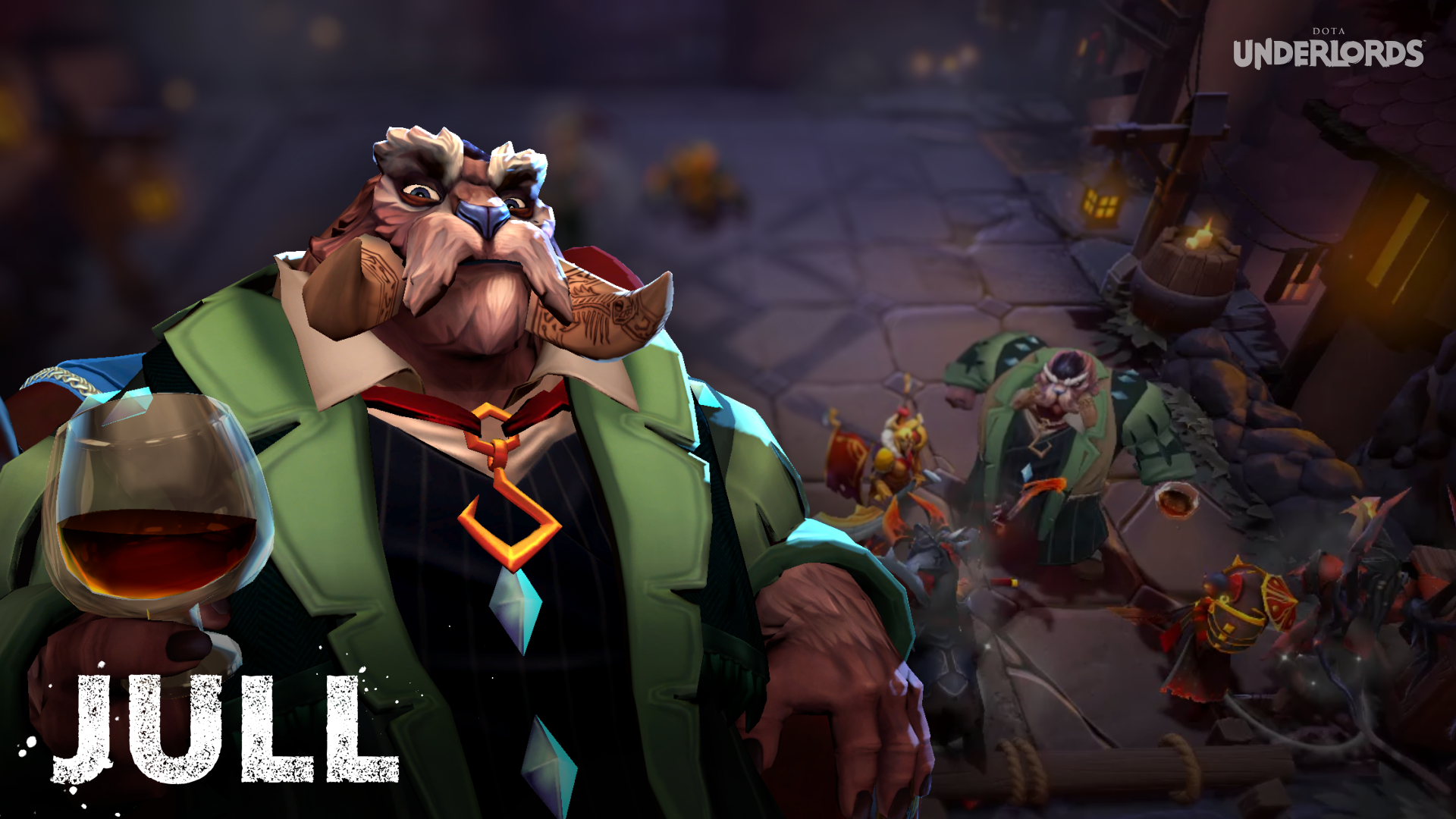 Jull leads by example, and prefers to get his paws dirty with powerful melee attacks on the front line. When things get tough Jull uses his bootlegged wares to gain an edge… either by rolling barrels into enemies, or by raising his glass to inspire his crew.

UPDATED ITEMS
With this update, the item roster has also been revamped. Many old standbys have been shelved (though you may be seeing them again in the future) while others have been pulled out of storage. New items like Crystalys, Butterfly, and Horn of the Alpha can now be equipped to buff your crew and defeat your opponents. 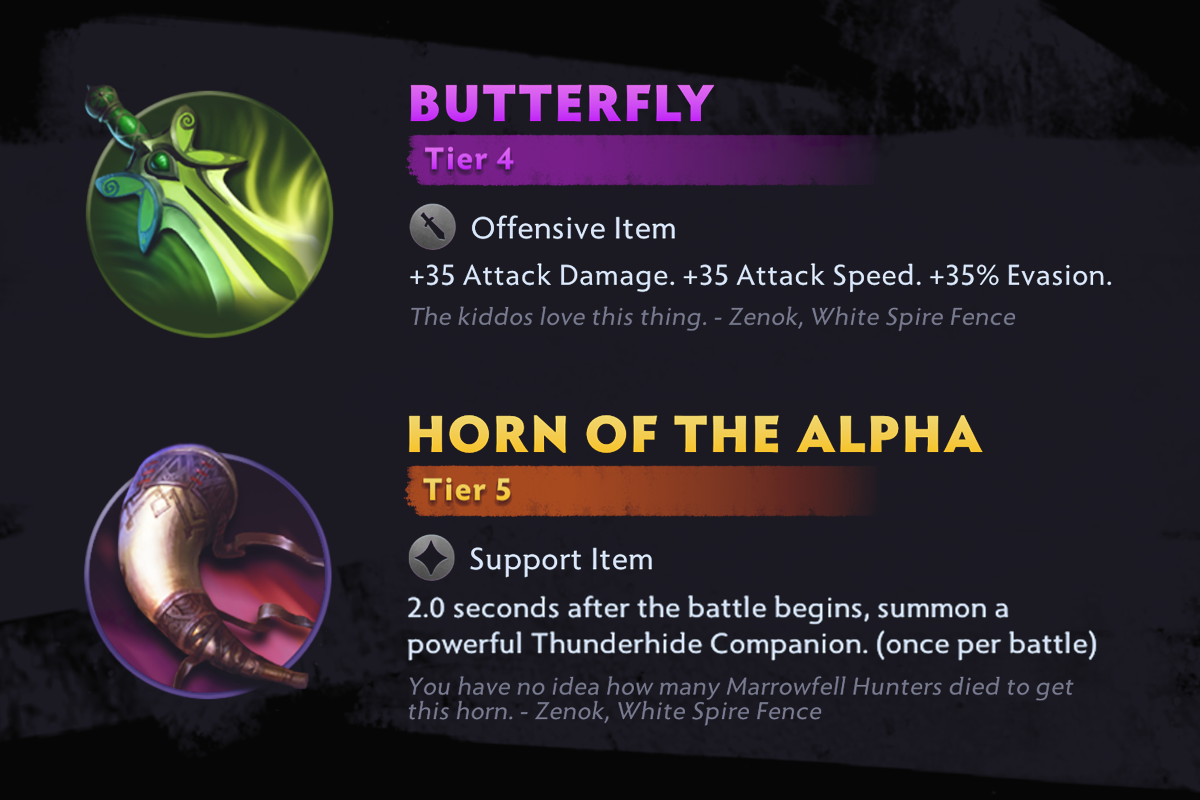 GAMEPLAY UPDATES
Over the course of our Beta season, we’ve worked to continuously experiment, learn, iterate, and improve the game. The time since our last Big Update has been no different, and with this update we have made some significant changes based on community feedback, as well as what we've internally learned and tested.

NEW UNDERLORD SELECTION FLOW
Underlords are now picked at Round 10 instead of the beginning of the match, and Talents have been converted into fighting styles. Each Underlord has two builds, and one will be shown at random for each Underlord during this pick phase. For example, you may have a choice between Anessix - Healing Support, Hobgen - Support Damage Dealer, and Jull - Aggressive Tank. Full build info can be found in-game and in the patch notes. 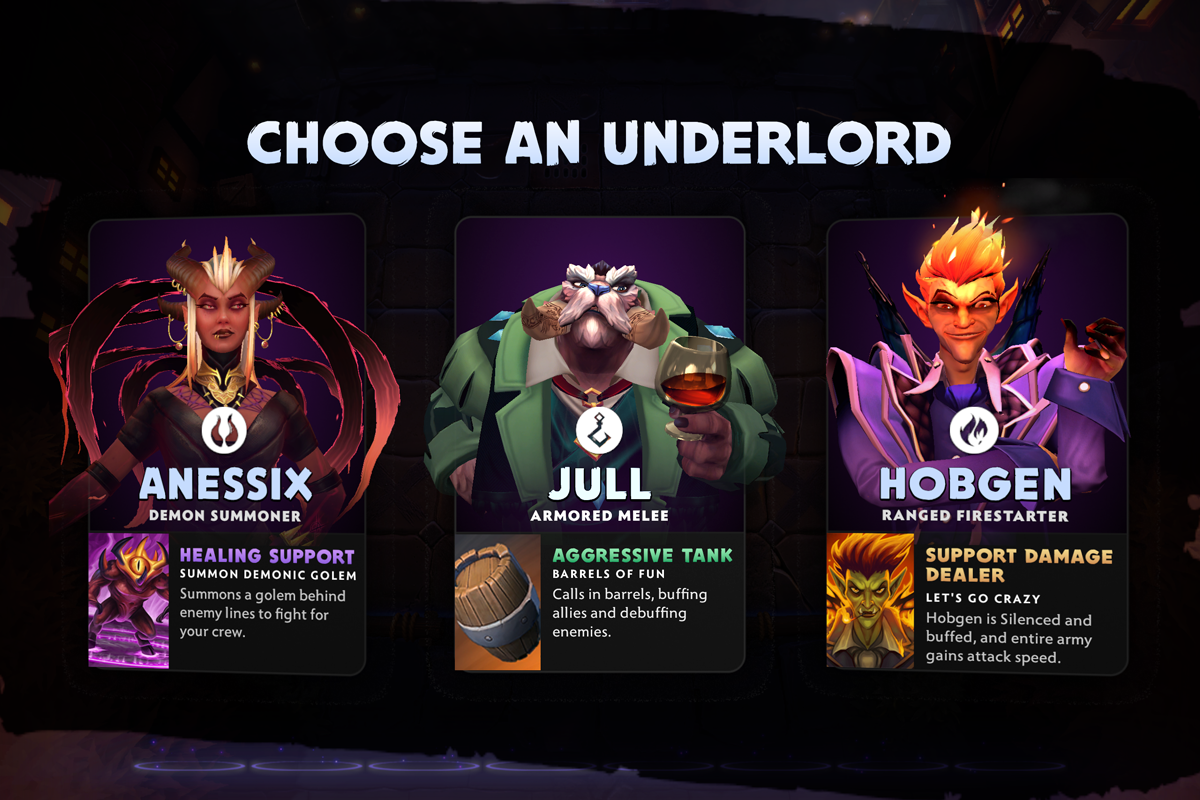 In Standard and Duos, Underlords are chosen at Round 10, while in Knockout this happens at Round 2.

JAILBREAK
The Jail system was introduced to solve a few problems - namely to make it easier to combine units with our ever-expanding roster of heroes. While this was accomplished, there were a bunch of unintended side effects. It wreaked havoc on some of our balance tweaks, kept players from playing their favorite heroes and alliances, and many players didn’t enjoy having to check it every day. That's why we've decided to shut down the Rookery and release all of the inmates indefinitely. The heroes that are in the game will always be hire-able in the shop, and players won't have to worry about their favorite Alliances being crippled because of a bad Jail day. That said...

UPDATED HERO ROSTER
White Spire does still have an overpopulation problem. To solve this, a few heroes have been booted from White Spire (for now...). As we mentioned at the very beginning of our Beta Season, we intend to have a hero rotation every season, and we're getting ready for Season 1 with our first rotation. After plenty of testing and feedback we came up with a slimmed down set of heroes to build your crew with. Not to worry though, you may still be seeing some new and familiar faces when Season 1 ships. For a full list of there heroes taking a break, check out the patch notes.

SHORTER STANDARD & DUOS MATCHES
We've also made major changes to the Standard and Duos game flows to make the overall games shorter. We've taken what we've learned from Knockout, internal testing, and from our community at large to make games shorter and more fun.

To accomplish this, matches are now jump-started with all players at Level 3 with 5 gold. We've removed creeps from the loot rounds and reduced hero HP by 25%. Loot rounds now happen during normal PvP rounds, but your item choices won't be affected by whether you won / lost. The team has been having a great time playing the updated Standard mode, and we've seen a significant decrease in match time - down to an average of thirty minutes.

POLISH
Last and most definitely not least, the team has put a bunch of time into polishing UI, fixing crashes, optimizing effects, and squishing bugs. For a full breakdown of these changes and all of the other changes listed above, check out the patch notes.

That's it for today! Happy holidays, and see you in White Spire!
18 decembrie 2019
Jull-tide Changelog
ROUND LENGTH
All units have had their health lowered by 25%. Health values are now 1.5x the original values that we shipped with the game initially.
Dev Note: We wanted to find a balance between early game and late game survability for our units. Doubling the health was too much, and we think we found a good balance with the new health values.

BOTS
HERO ROTATION
The following heroes have been removed from the game.

ITEM CHANGES
The item pool has been refreshed with a host of brand new items.
All global items have been removed.
The entire item pool now consists of hero equipment and contraptions.

REMOVED ITEMS
The following items have been removed from the game: